Voices from the war in Eastern Congo


When you woke up this morning you no doubt had a daily routine that you normally follow...wash, dress, eat, head to work...most of us do this every day without thinking. But for families in the provinces of North and South Kivu in eastern Democratic Republic of Congo the situation is very different. They won't have woken from a comfortable bed, had a warm shower, enjoyed a healthy breakfast, and headed off to work. For them the daily routine has become a nightmare.

They are caught up in a 15 YEAR war that is raging around them. Every day people have to flee their homes or temporary shelters, once again on the run from various armed groups. They have little or no food and water, only the clothes they stand up in, and what they own they carry on their backs. Mothers, fathers, grandparents, babies and teenagers; everyone is struggling to survive the looting and violence.

See the Special website "Condition:Critical -Voices from The War in Eastern Congo- "

I wonder how you think when you see the site.

Just feel sorry and continue your dinner?
If so, nothing is going to be changed.

I'd like you to think seriously, and take your own action.
Posted by nobyama at 00:28 No comments:

I googled error messages which SQL Server logged.
Then only one answer I could find all over the web.
It was MSDN blog written by a technical engineer in Stockholm.

Thanks to the blog, my problem was solved.
I had to solve it by Friday. I was really relieved.
If not for that information, I wouldn't be able to sleep at all.

Thanks someone in Stockholm!!!
Posted by nobyama at 00:36 No comments:

You can hardly find the road which is definitely flat.
Almost every road is ascent or descent.

It is not only real about road but also about metaphorical road.

Moreover, even if the road is paved, it is uneven, not to speak of dirty roads.

It is also not only real about road but also about metaphorical road.

To aim for the goal.
Posted by nobyama at 00:32 No comments:

Opportunity rarely knocks on your door. Knock rather on opportunity's door if you ardently wish to enter.
- B.C.Forbes

Yes, I agree with this sentence.
So I have to step forward to knock the door!
Posted by nobyama at 23:32 No comments: 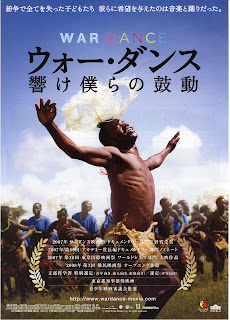 I found good rythem and a lot to think in this movie. And also I was really moved.

This movie was the documentary of northern Uganda.
For the past 20 years, northern Uganda has been at war with rebel force, and the country's children have been the greatest victim of the conflict. But, children is not only the victim, they are rebels. The rebel has a chillingly effective process to fill its ranks - abducting innocent children. Most of their parents, brothers, sisters, or relatives were killed. Some of the children were force to be soldiers or sexual slavery.

Their saddness and pain must be far beyond my imagination. Their traumas are so deep.

The children in school in refugee camp tried to pour their hearts into winning this year's music competition in Uganda. When they play music, they can forget thier past. And they can start thinking of their futures through music.

In this movie, you can see magnificient scenaries. Uganda is a very beautiful country.
But what happens in this country is horrifying.
I was moved by their attitude to pour themselves into music.
They are trying to make their stories. Their stories doesn't end as unfortunate children.
They can continue hopeful stories.
In fact they could. They could get a trophy.
They are not only the children who lost their parents but also the children who got the trophy in national music competition.

This movie is really worth watching. I strongly recommend!
Posted by nobyama at 00:00 No comments:

It took about an hour from Helsinki to Porvoo and it's 53km away from Helsinki.
I felt long distance at that time. But I found it was not such a long way later.

After arriving at Porvoo, I headed for the Vistor Information.
Because I wanted to have newest map.
But the Information was closed, so I couldn't.
In Finland, town is not as town on Sunday.
A lot of shops are closed.
And I'm surprised that the price of hotels is sometimes cheaper in weekend.
It's quite opposite in Japan!

Porvoo is the second oldest town in Finland.
Many historical buildings are still remained.
And there are a lot of red painted wooden houses along the river.
When I vistied there, unfortunately it was cloudy.
If it were fine, I would be able to enjoy the excellent contrast of red houses and blue sky.
Even when it was cloudy, it was worth to see.

By the way, it was not only red painted wooden houses but also slopes that counts.
Cobbled slopes and narrow paths.
When I entered one of the paths, I happened to reach the place where I found the beautiful lawn.
I enjoyed seeing small articles by the window or plants outside the houses.

I found the small restaurant named Hanna Maria.
This restaurant was introduced in Lonely Planet.
It was very delicious. I ate salmon soup with bread and salad. It cost only 6 euro.
I think it must be very cheap in Finland.
In this restaurant, there was no English menu.
But they translated by mouth.

After eating lunch, I walked around again.
Then I left Porvoo for Helsinki.
(to be continued...)
Posted by nobyama at 00:00 No comments: