Between you and me

We started this project on Mar 30. There were 15 members, and were divided into 7 groups. The group I belonged to are composed of 3 members. We have prepared for this exhibition since then. Our team was really a slow starter. We did almost nothing until July 20! But once we started the work, we did our best. We went to several place to take pictures and had a lot of meetings after work.

Since we are not professional photographer, we are going to receive lots of criticisms. Still, I'm satisfied with our work.

So if someone asked me 'How was your summer?', I'll answer in front of our work 'This is my summer.' 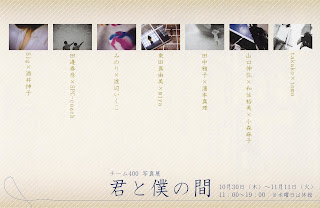 When I went back to the room, the roommate had already waked up. According to him, he was from Canberra, Australia. To my surprise, he traveled Tokyo before coming to Helsinki! He knew the word 'Depachika', which means basement floors of department stores. And what's more, he had a plastic bag of Yodobashi Camera, very famous Japanese discount store. He bought a digital camera there. Although that digital camera was very fanctional, all the instructions were made by only Japanese.

He didn't seem to smoke, but I went to the reception to ask to change the room to non-smoking room. I was told to come again at 12 o'clock. I wanted to go out, so I left my baggage at the storage room and left the hostel.

Today's destination was Porvoo, which was the 2nd oldest city in Finland. Though it was clear when I walked aroud in the early morning, the sky was covered with thick cloud. First, I had to find out the bus terminal. Long-distance buses didn't leave from the railway station. And it was not so close to the railway station. And it was in the underground. It was not easy to find out the place.

Just as I feared, I got lost! I thought I was still a stranger here in Helsinki. I had a map, but I couldn't figure out where I was. About one hour passed since I left the hostel. I tried to ask someone for help. Then I was told that I was in front of the building of the bus terminal!

I bought the return ticket at the ticket office(20.60Euro), then I moved to the basement floor. The bus left for Porvoo at 11:30. One hour and 30 minutes had passed since I left the hostel. It was longer than I expected.