I met several people, climbing by stages. These steps were really challenging.

Since I didn't take a break, there was no one in front of me.
Sight was getting worse.
I relied on the marks when climbing, but it was getting more difficult to find them.
Only sometime I could see the blue sky.

The path was gradually getting flat. Maybe I was approaching the peak.
Also, the light of the sun was getting stronger, although I couldn't still see anything below my steps. 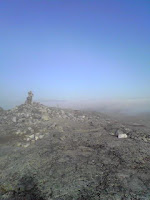 Finally, I found the mark of the peak.
The fog gradually dispersed.
When I finish talking with the men who came from Oulu, the fog completely dispersed and a superb view was spread in front of me.
I was so impressed that I took a lot of photos. 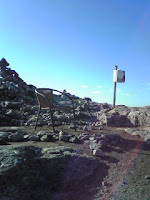 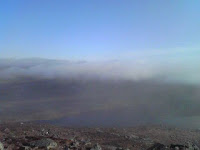 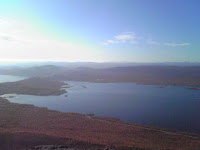 (to be continued)
Posted by nobyama at 19:42 No comments:

I woke up at 6 in the morning. But I was careless to fall asleep again until 7:20. When I went to the restaurant, a lot of people were waiting in a queue. Anyway, I had scrambled egg, Vienna sausage, coffee, milk, and so on. They were all delicious!

The weather was not so good, though the weather report said that it would be fine. However, I could see some sunshine a mile off.

I went to the reception to rent a bike. The woman in the reception said, 'It will become fine. The view is very beautiful even if you climb only a little.' At that time, I couldn't see the top of Saana Fell because of heavy fog. I left for Saana Fell at 8.

I arrived at the start point around 9 and began climbing at 9:05. I could possibly see surroundings in spite of fog. After 15 minutes walk, I found a very long steps. It was really long. I wonder how long I walked these steps.

As the woman said, the view from here was magnificent. I met a few climbers. They were all climbing by easy stages. But I climbed so fast that I left other climbers behind. The sight was getting worse. I relied on the marks when climbing, but it was very difficult to find marks. Sometimes I could see a fraction of blue sky. But not a long time.

(to be continued)
Posted by nobyama at 01:01 No comments: